The BENEI and Co. Ltd. is founded on the experiance of a confectionary dinasty which base stands on the parents and grandparents of the Benei family. From the beginning of the 1900s the family operated a high-standard cake shop in Berettyóújfalu. As the time went by the company went through some major developments and relocated its basis to Debrecen and then to the capital – Budapest.

That was the place where the company’s current managers and owners – Mr Laszlo Benei and his wife - started to work. Their task was to make the vital element of a confectionery shop: the waffer. This became such an important thing both in their and the companies life that in 1983 the firm became a family owned one and based the company to Budakeszi. 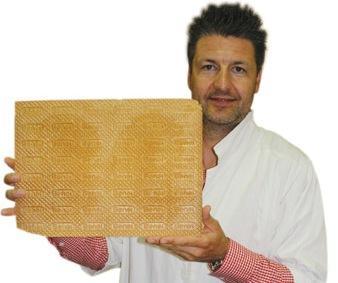 The firm aimed for such a high standard from the really beginning that it successfully signed contracts with Hungary’s biggest food retailers.

Those early successes made possible for the company to extend its number of employees from 3 to 15 in a few years. In 1992 they installed the first automatic waffer making machine which at the same time led to the opportunity of making new products.

In 1995 the company started its production for the foreign market as well – Austria, Slovakia and Romaina were their main partners who are still the firms main customers.

Business with the international market made it possible to do further extensions in the companies life: the number of employees went up to 40 and in 1996 they installed the first automatic waffer cake making machine.

The production and the expansion of the market soon felt the effects, and the firm Budakeszi proved narrow. Had to find a new place, which was discovered in 1997 in Budapest, Bogáncs street. Then they purchased and transformed  the previously charged Rakospalota dairy. The area is 30000m2's with the 7500 m2 property on it been shown to be suitable for the implementation of development plans. Making the new production plant takes 2-3 years, and in 2000, the move could happen. Simultaneously, the former limited partnership became a limited liability company and the number of employees has also increased from 100 to 130 heads.

The development is not only showed int the size of the company, but the new products have appeared, which has also need to use new technologies. The wide range of sweet and savory cakes get into the product list, next to Naples. Using  the necessary production and packaging machines makes the professional level increased.

This huge development makes one step forward ont he market. Domestic and foreign customers other than mentioned above, new clients have been in this country palette. In this way, now transported to Germany, Italy, and overseas in Canada and the U.S. became a partner.

For us, the management of Benei & Co. Ltd. the standard strategy is to keep the market position and maintain the progress already and maximizing as possible, mainly on the domestic markets wich we would like to reach by expanding the product range and excellent quality. Our confectionery plant is particular emphasis on results of the practical application of nutrition science, therefore, the manufacture of our products only the evidence of good quality materials used.

We would like to preserve and develop the traditions and flavors of the Hungarian sugar confectionery.

All of our products feature the most careful that they are produced and we are taking full guarantee that safe to eat.

In addition, we wish to fully comply with our products and our company for the operation of domestic and international legal, and regulatory requirements.

Our company is committed to continuous improvement in addition, which includes both the technical development and improvement of the food safety system. During the work performed a continuous quality control to ensure that our products meet the customers' needs.

This is supported by our company IFS used for food safety and traceability system.

The quality policy objectives and production targets can only work a demanding environment, a highly educated leaders and conscientious workers can be implemented.

We expect that all managers and employees identify with the objectives of such management, and personal example to contribute to the business and professional success.